The Ultimate Guide to Overdraft Fees

Overdraft fees are one of the most expensive penalties banks can impose on their customers for failing to keep their accounts in good standing. These fees have also long been a focus area for regulators for this reason. Most recently, the Consumer Finance Protection Bureau published research in December 2021 showing that in 2019, financial institutions made $12 billion in revenue from overdraft fees, which significantly outpaced their earnings from other fees including account maintenance and ATM fees. While most banks at this stage publish information about their overdraft policies, it is often complicated and difficult to understand what your options are and what you might have to pay if your accounts get overdrawn. This article aims to answer as many of the questions one might have about overdraft fees to help clarify exactly what they are, the various types of fees that can be incurred, how you can avoid overdraft fees, how different bank policies work, in addition to highlighting actions some of the largest banks in the country have taken in recent months.

Topics Covered in this Article

What are Overdraft Fees?

An overdraft occurs when a customer’s bank account goes negative, which is usually the case because the pending payments on the account exceed the balance that is currently in the account. Financial institutions can decide to approve these transactions in which case the account becomes overdrawn (i.e. balances goes negative) or they can choose to deny these transactions resulting in nonpayment. How a bank or credit union handles this is really at their discretion. In the first case, where they allow the account to go negative, the account holder’s account is overdrawn and they will most likely have to pay overdraft fees as a result. In the second case, the account holder will likely have to pay a non-sufficient fund (NSF) fee because the financial institution blocked (and therefore returned) the transactions without paying them.

How Pervasive Are Overdraft Fees?

As mentioned above, research from the CFPB indicates that banks earned $12 billion from overdraft fees in 2019, which is obviously a very substantial amount. Our own research indicates that about 23% of consumers in the United States get charged at least one overdraft fee per year:

Our own estimates based on our survey data and using an average overdraft cost of $36 led to a total annual overdraft fee burden to consumers in the United States of $9.5 billion (shoot us an e-mail if you’d like to see our calculations and assumptions). And remember, this is even though only 23% of the population actually incurs these fees each year.

The 5 Types of Overdraft Fees

If your bank account ends up in the situation described earlier where the balance in the account is not enough to cover the pending charges, there are a number of different charges you could end up incurring as a result. The 5 charges we cover below are far from an exhaustive list as each financial institution has their own set of rules and policies, but these are the most common: 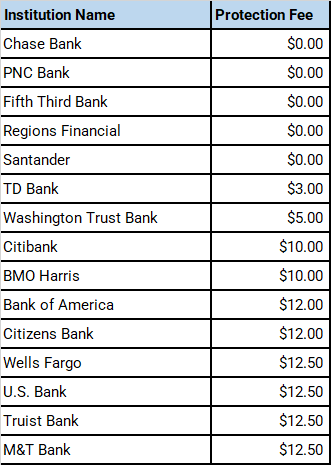 What Do Major Banks Charge For Overdraft Fees?

As discussed in the previous section, there are several types of overdraft fees. But focusing on the traditional (and most popular) type of overdraft fee, as the table below shows, these tend to run between $30 and $37 per item. This is an important point: the way overdrafts work, banks will charge you for each item that they allow to post that overdraws (or further overdraws) the account. 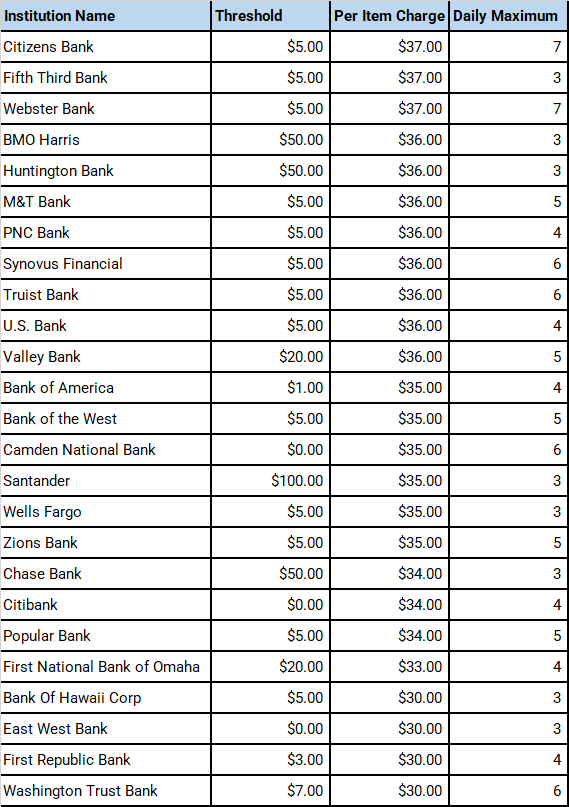 In addition, most banks also have a threshold (we like to think of it as a buffer) under which they will not charge you for an overdraft. This is what is shown in the “threshold” column in the table. Santander Bank, Chase Bank, Huntington and BMO Harris stand out for offering a decent buffer to their customers. So if your account is overdrawn at Chase Bank by $49.99, you will not be charged $34, however at Bank of America you would start incurring the $35 overdraft fees once your account is overdrawn by $1.01. Further, most banks have a limit for the number of overdraft fees they will charge you per business day which is what is shown in the “daily maximum” column.

How Overdraft Fees Work in Practice

To help illustrate how overdraft policies actually work and to shine a light on the complexities involved with overdrafts, we decided to create an example using Wells Fargo’s current overdraft policy as of this writing. 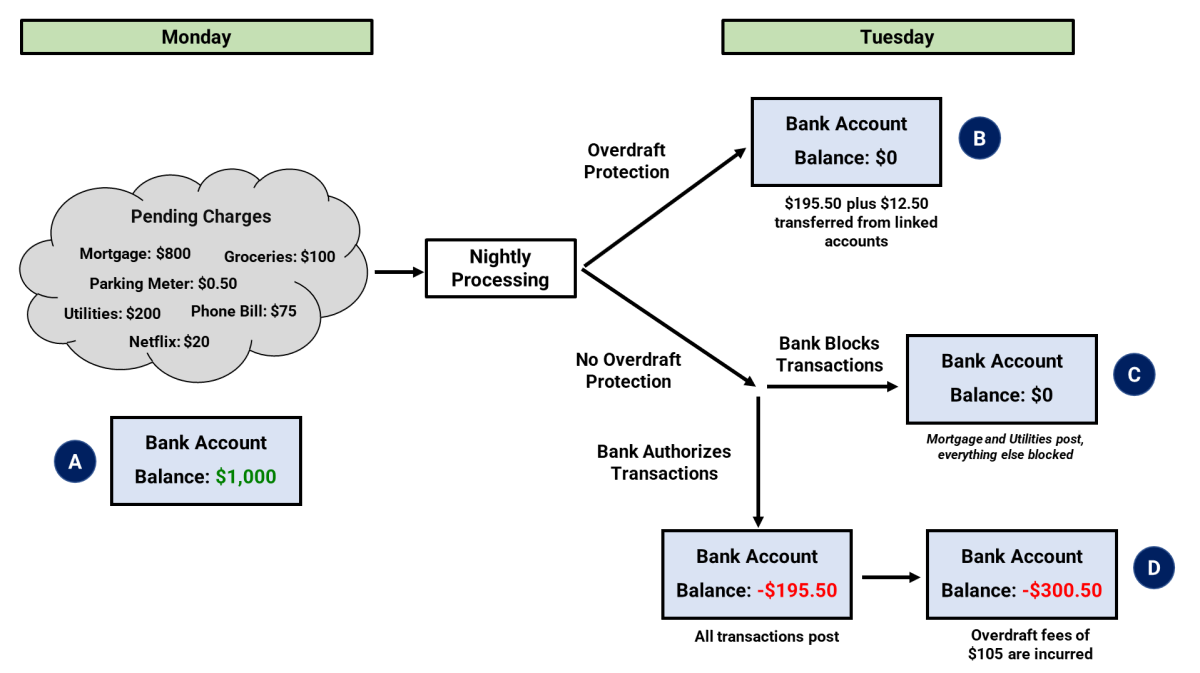 In this example we start at point A. This customer has a Wells Fargo bank account that has $1,000 in it and also has several pending charges on Monday. These pending charges add up to a total of $1,195.50. On Monday night Wells Fargo starts its nightly processing and realizes that the balance in the bank account is not sufficient to cover the pending charges. If the account has overdraft protection – which is an optional service Wells Fargo customers can add – then funds from the account holder’s savings account or credit accounts can be used to bring the overdrawn account back to $0. In this scenario we end up at point B, the customer’s bank account is now at $0 since they were able to transfer $195.50 into their bank account to cover the overdraft. The customer has to pay Wells Fargo an overdraft transfer fee of $12.50 for facilitating this maneuver.

However, if the customer does not have overdraft protection, then the bank gets to decide whether they will authorize the pending transactions or not.

Banks That Are Reducing or Eliminating Overdraft Fees

There has been growing focus on overdraft fees by regulators in the United States which isn’t much of a surprise given how significant the revenue generated from them are at the expense of the U.S. consumer. In response to this, there have actually been a number of large banks that have announced changes to their overdraft practices over the past few months:

While these moves are clearly encouraging, not all banks have followed suit and in many cases overdraft fees still exist just to a lesser degree.

How to Avoid Overdraft Fees

There are actually several steps consumers can take to avoid having to pay overdraft fees. Even though you might be pretty good at having an idea of what the balance is in your account, the timing of pending transactions can often throw things off. These are 4 suggestions we think will help you significantly lower the odds that you end up in an overdraft situation:

Conclusion: Don’t be a Typical Millennial!

The latest consumer survey we conducted showed that Millennials significantly overindexed when it comes to overdraft fees and account for almost 50% of overdraft fees that are paid in the United States. We are yet to find a plausible explanation for this, but hope that having read this article you’re a lot more informed about overdraft fees and equipped with tactics to minimize how many of these fees you incur in the future.