Mortgage Rates: Everything You Need to Know

Getting a mortgage is an essential step that almost all of us have to go through in the home buying process. But there are many elements with every mortgage: the amount of the mortgage loan, the mortgage term, the implied loan to value and the mortgage rate. This article is interested in that last piece: the mortgage rate. Over time we certainly endeavor to cover all components but it is our belief that mortgage rates need to be better understood by consumers simply because the interest rate is by far the most important variable of any mortgage loan.

What's Covered in This Article

What are Mortgage Rates?

When a bank, credit union or other lender, quotes you a mortgage rate, what actually goes on behind the scenes? There are usually three main factors that determine the mortgage rates a lender offers its consumers: 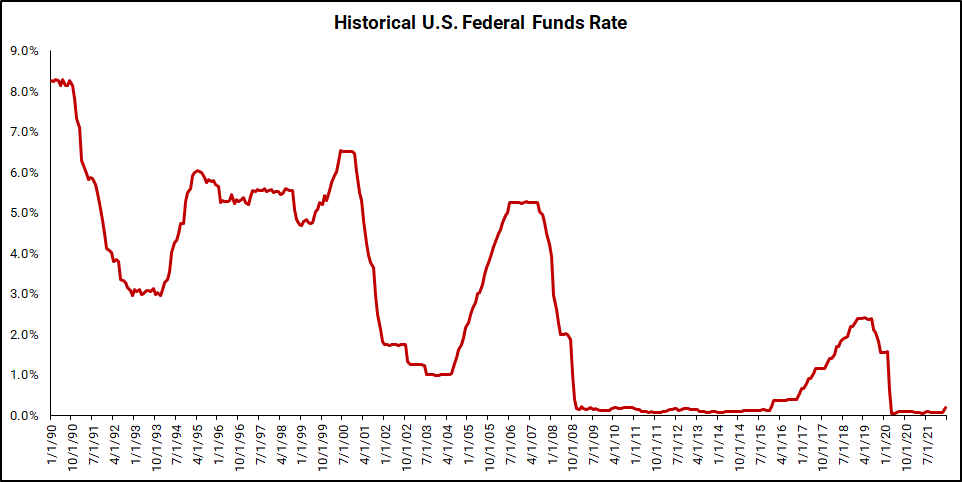 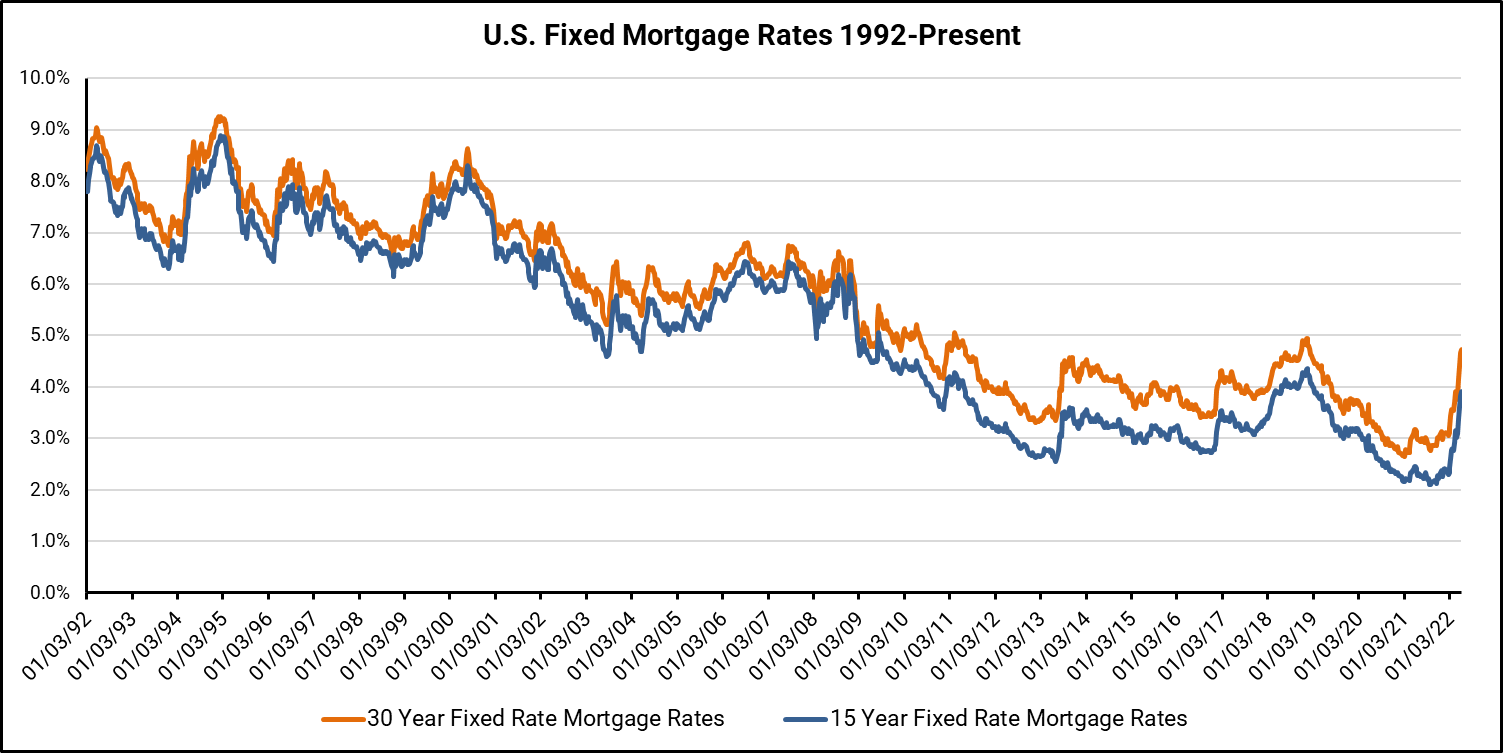 The chart shown above is based on data from Freddie Mac’s Primary Mortgage Market Survey which they have been conducting for decades. Two things should be immediately clear. The first is that mortgage rates are clearly volatile and it is not unheard of for rates to move a few percentage points over a period of 2-3 years. The second is that mortgage rates have been exceptionally low compared over the last decade compared to the last 30 years. As you can see in the chart, for the entirety of the 1990s mortgage rates were between 6% and 8% and sometimes got as high as 9%. Keep these figures in mind as you look at the chart below which shows the average annual mortgage rates since 2010. 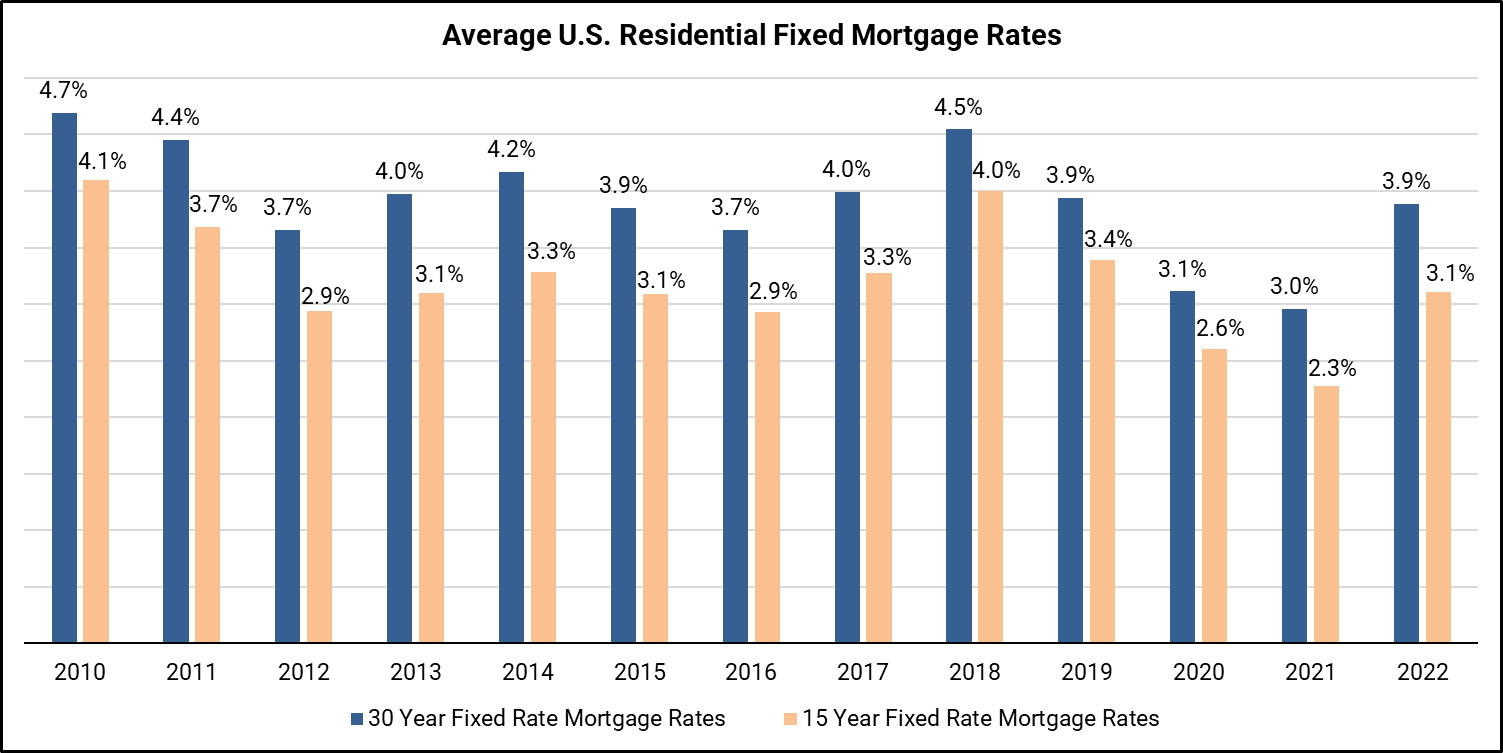 This chart shows the same information from the first chart except in annual averages. The point is that for all of the past decade, mortgage rates have been well below historical levels with 30 year fixed rate mortgages at 3.0-4.5% which is less than half of the rates in the 1990s. This history is important to keep in mind as you try to figure out what a “good” rate is, whether you’re buying or simply refinancing your mortgage.

You might have noticed in the previous charts that there is a noticeable difference in the rates of the 30 year and 15 year mortgages. Specifically, the 30 year mortgage rate is almost always higher than the 15 year. Why is that? The short answer is risk. With a 15 year mortgage, the lender is contractually going to receive their money back sooner (in fact in half the time) than they would under a 30 year mortgage. In addition to the fact that this means that the borrower is paying back a higher amount of principal each month with a 15 year mortgage than they are with a 30 year mortgage, the shorter loan term also means there’s lower risk that the interest rate environment changes. As we discussed earlier, this is one of the key determinants of the mortgage rate. If a lender issues a mortgage and then the interest rate environment worsens i.e. the bank’s cost of funding goes up, having a loan book with a 15 year duration is a lot less painful than one with a 30 year duration.

So far all of the mortgage rates we’ve covered were fixed mortgage rates. However, adjustable rate mortgages are a fairly popular type of mortgage offered by lenders. These mortgage loans start at a certain fixed interest rate for a predetermined time period then adjust to a floating rate of interest after that time period. The floating rate is usually based on a spread relative to some benchmark interest rate, which could be the Federal Funds Rate.

The chart shows the historical average annual rates for 5/1 adjustable rate mortgages. The 5/1 means that the displayed rates represent the fixed interest rates for the first 5 years of the mortgage. After this 5 year period the mortgage rate would reset according to a predetermined spread to a reference rate. Adjustable Rate Mortgages have tended to have lower rates than 30 year fixed rate mortgages because they are less risky to the lender. With an adjustable rate mortgage the lender gets to set the rate according to a reference rate which is usually representative of the interest rate environment. With a 30 year fixed rate mortgage, the mortgage rate does not change for three decades, so the lender bears all of the risk in the scenario where the interest rate environment changes for the worse.

What Does Inflation Mean For Mortgage Rates 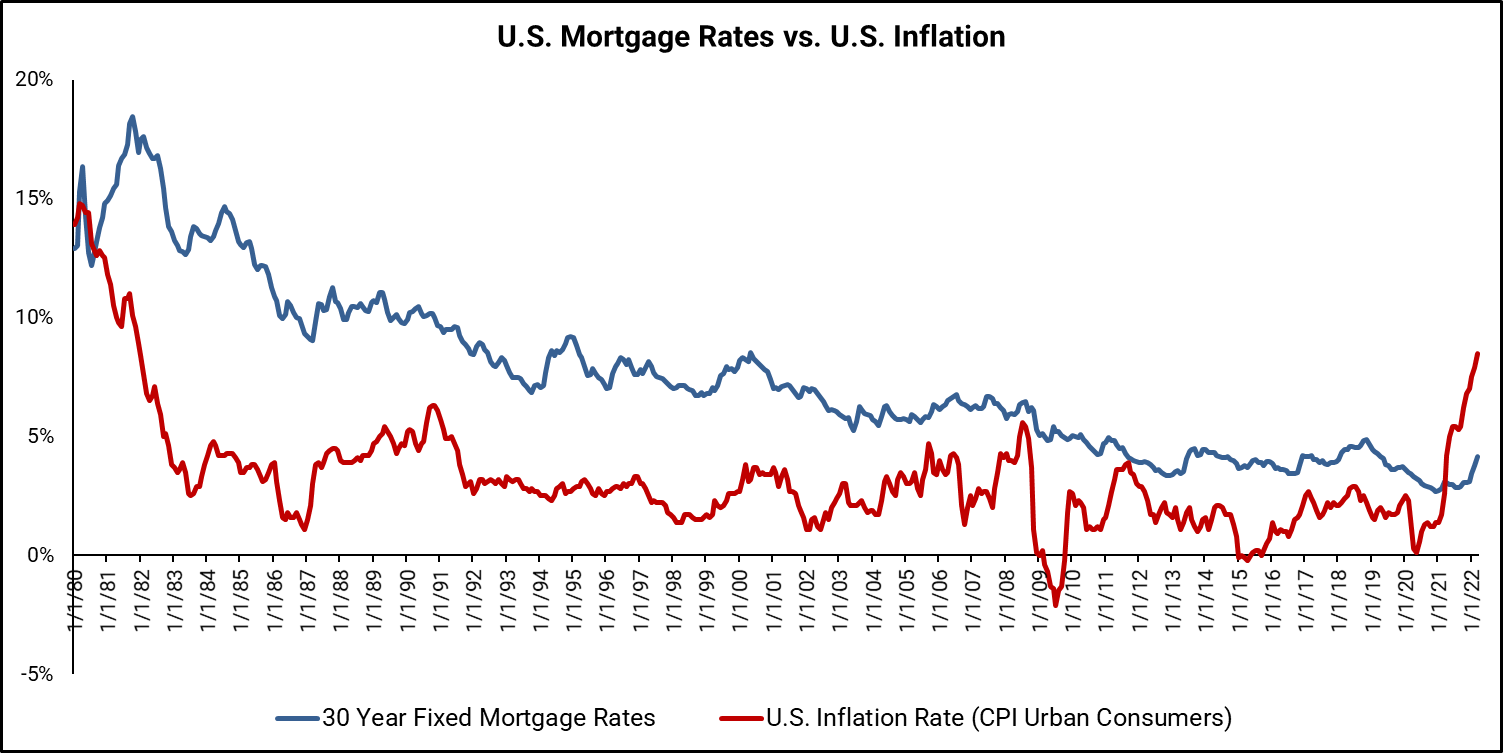 This is a question that is top of mind for many people given the current environment. As shown in the chart in the red line, inflation (as measured by the consumer price index) reached a multi-year high in the month of March 2022. Higher prices means that consumers can afford fewer goods and services with the same budget, which over time tends to result in lower demand for goods and services. If that were the only consideration then one could conclude that high inflation would lead to reduced demand for homes, which would then lead to lower mortgage rates. However, the added complexity is that the interest rate environment is also changing, and as discussed earlier, as rates start to increase lenders have no choice but to raised their mortgages rates as well or suffer decreasing profits. Over the long run, the summation of these two vectors – higher inflation and increasing interest rates – is what will determine where mortgage rates go. 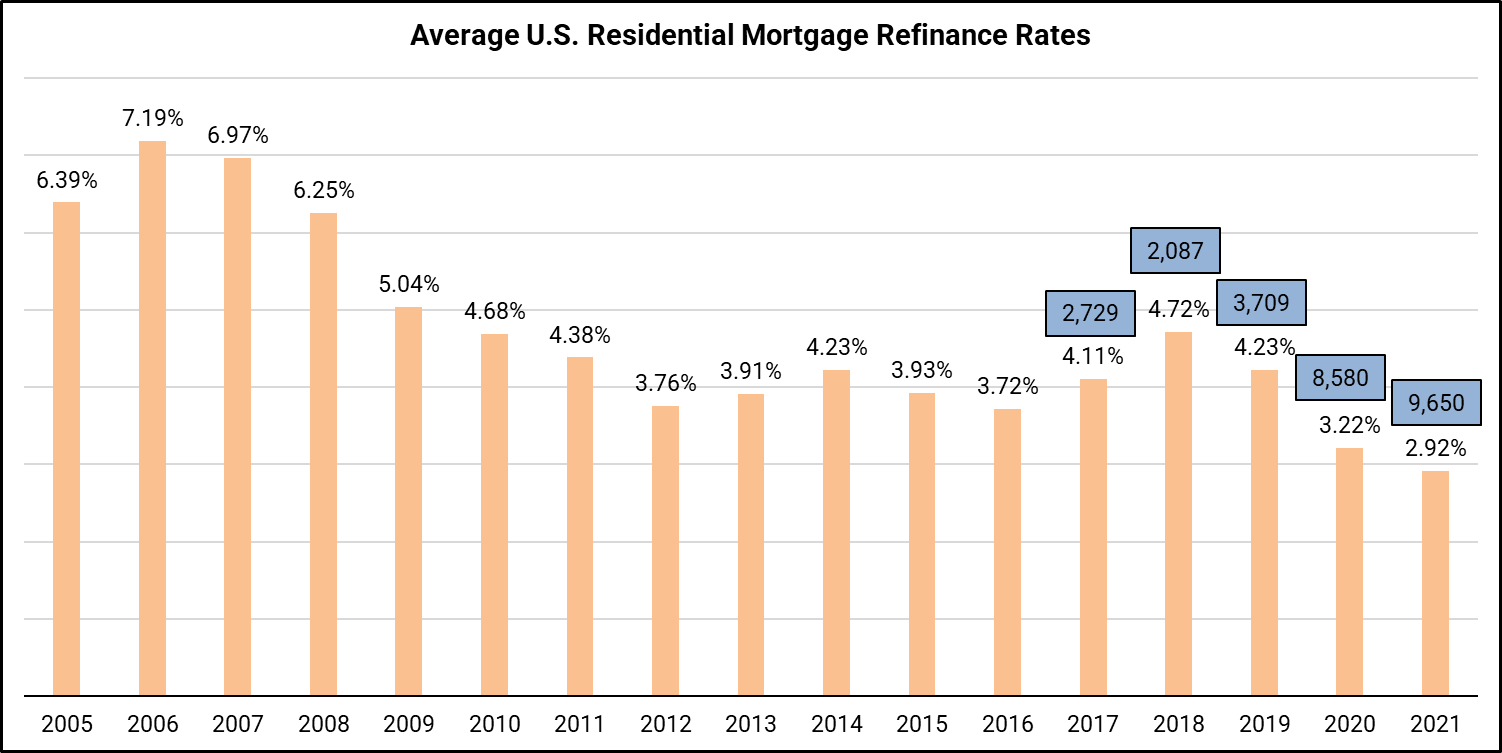 Now that you have a excellent idea of the history of mortgage rates in the United States, you should be well positioned to know when its a great time to refinance your mortgage. It shouldn’t come as a surprise that the last two years – 2020 and 2021 – were the two largest years for mortgage refinancing transactions in more than 15 years. As shown in the chart (which is based on data from the FHFA) in 2020 there were 8.58 million refinancing transactions and in 2021 (this is our estimate using partial year data) we believe there were 9.65 million refinancing transactions. In 2020 and 2021 the average mortgage rate for 30 year fixed rate mortgages was the lowest it had been in more than 15 years, so it is not surprising that consumers took notice and refinanced their mortgages at lower rates. This point is especially relevant today – as those who refinanced their mortgages in 2020 and 2021 did so at average rates of 3.22% and 2.92% respectively, which is now much lower than market rate for 30 year fixed rate mortgages which is approaching 5.0%!

So at this point you know exactly what mortgage rates are, how they are determined and also how they’ve evolved over the past 30 years. But what does it actually mean if you get quoted a 30 year fixed rate mortgage for 5% vs. 4.5%? Of course in the former case it means you will be paying more for your mortgage, but how much more?

We built this chart to help you conceptualize the total additional cost to you from higher interest rates. Now of course if the size of the mortgage increases then so will the total cost, so the above chart shows the approximate increase in total interest payments over the life of a 30 year fixed rate mortgage if mortgage rates were increased by 0.25% at various home prices. This assumes a conventional mortgage with a 20% down payment. So in the most typical scenario of a $400,000 home (which is approximately the national average), with a $320,000 mortgage, if mortgage rates were 0.25% higher, the borrower would pay $16,750 more in interest over the loan term. Keep in mind that compared to December 2021, as of this writing interest rates for 30 year fixed rate mortgages have increased by almost 2.0%! 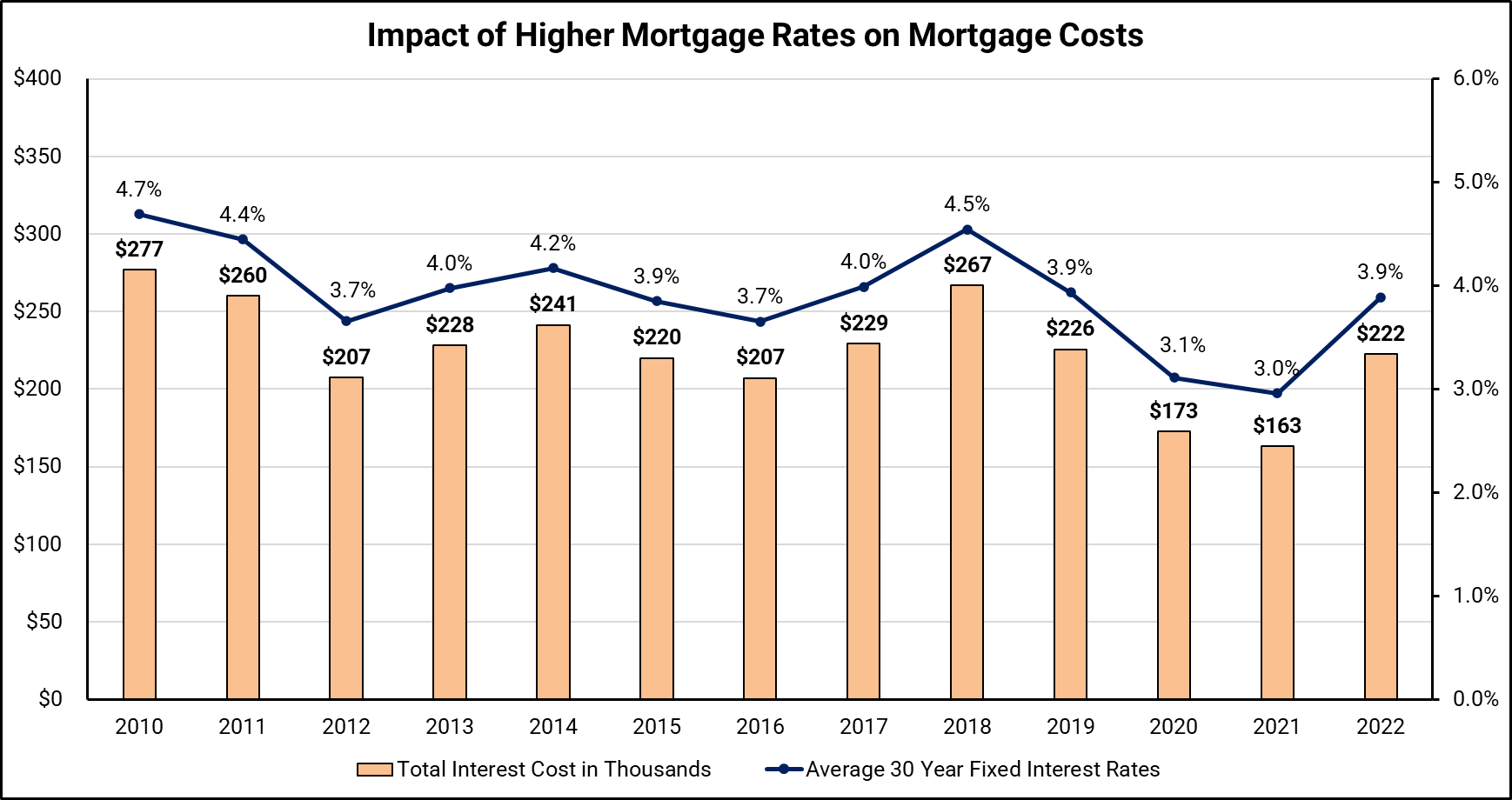 Given the changes in average mortgage rates each year, the loan economics for mortgages also changes significantly. This is what is shown in the above chart. It assumes a conventional 30 year fixed rate mortgage for a $400,000 home with a 20% down payment. The interest rates shown are the average interest rates that consumers paid for 30 year fixed rate mortgages in the relevant years according to data from Freddie Mac. If a consumer bought a home under the aforementioned assumptions in 2018, they would pay $267,000 in mortgage interest over the loan term. However, if they bought the same home but in 2021, because of the lower interest rates, they would have entered a mortgage loan where they had to pay $163,000 in interest over the loan term. The change in interest rates from 4.5% to 3.0% saves almost $100,000 in interest cost – keep in mind that this is for a $400,000 home and a $320,000 mortgage loan, the total savings is very substantial. 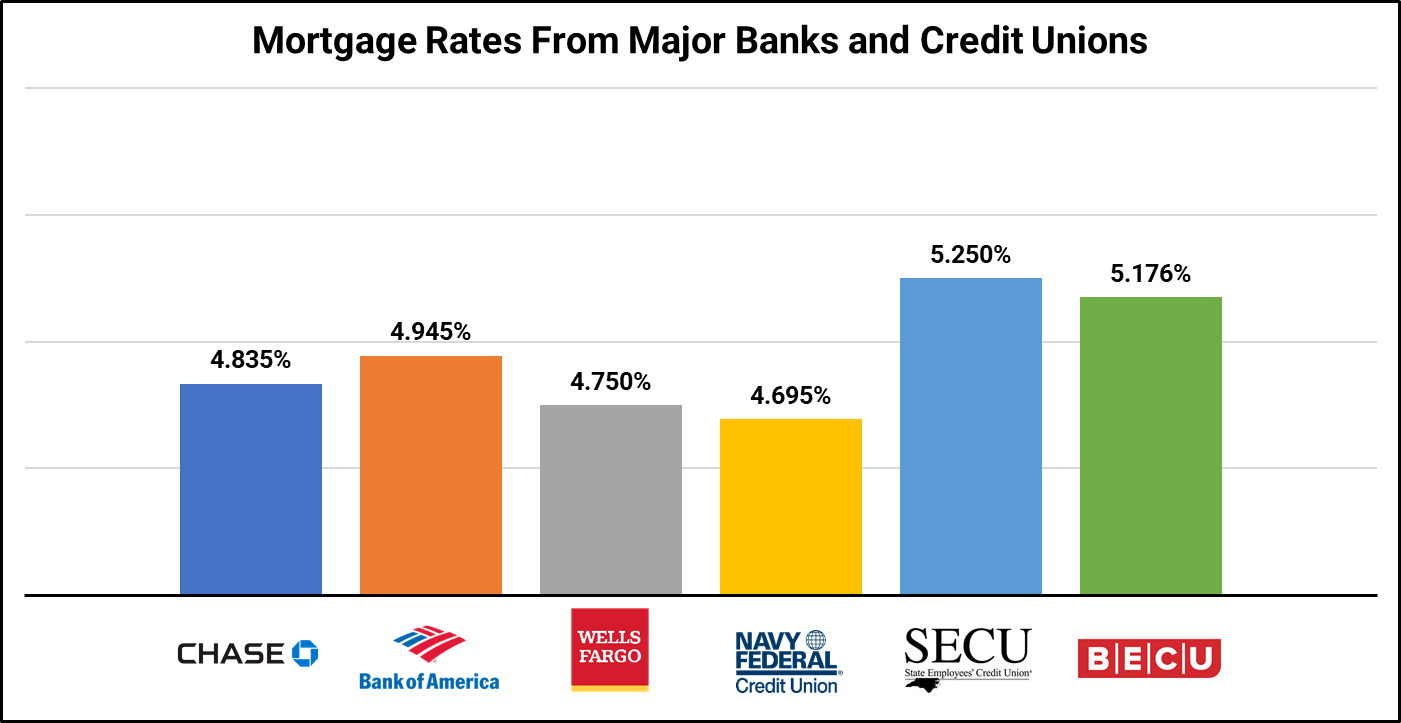 This is obviously information that becomes obsolete almost immediately given the fact that interest rates change daily, but it should provide you with a sense of where we are as of this writing  (April 2022 and on average at 5.0% for 30 year fixed rate mortgages) relative to where mortgage rates have been in the recent past. Mortgage rates have increased substantially over the past 3 months, and it could be that they continue to increase, but we are still well below the rates consumers faced in the 1990s and early 2000s.