The Credit Union vs Bank Decision

What are the differences between a Credit Union and a Bank? This very commonly asked question usually stems from a decision consumers have to make about where to open an account. Whether its for traditional custodial services such as a checking or savings accounts or for loan products such as credit cards, mortgages and auto loans, the fact that these products are offered by both credit unions and banks means that many consumers have to weigh the credit union vs bank question very often. We conducted a survey in March that found that approximately 75% of Americans use a bank as the provider of their primary financial services and products while only 25% use a credit union. It is fair to say that so far when consumers have faced the question of credit union vs bank, the latter has been the answer a disproportionate percentage of the time. These are the 3 critical points in the credit union vs bank question.

In our view the most significant difference between credit unions and banks is the fact that with credit unions, members – who are also the customers – are also the owners while with banks, account holders are almost always just customers. This stems from the fact that by law credit unions are not-for-profit organizations whereas banks are profit-seeking and exist first and foremost to serve their shareholders. So what does this mean in practice? 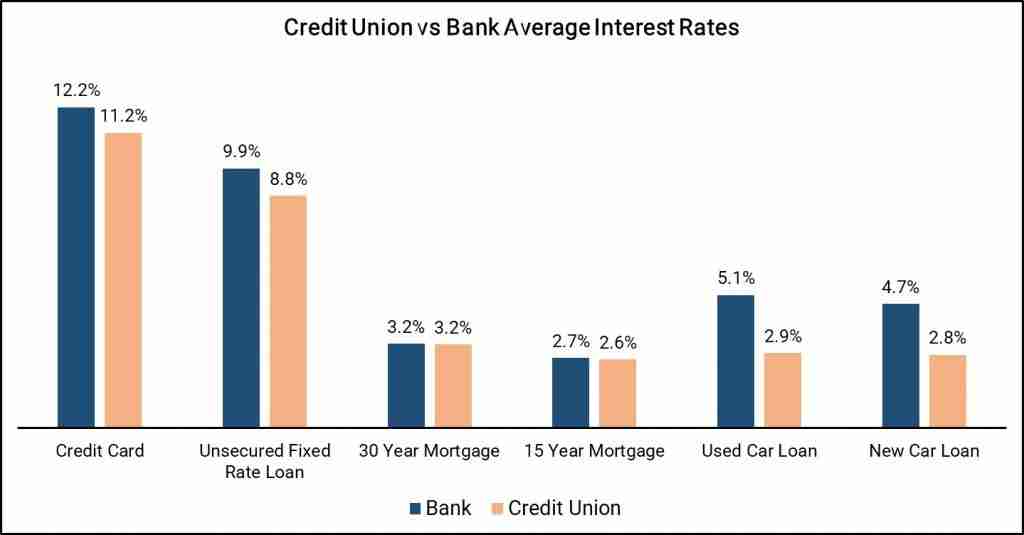 The difference in incentives between credit unions and banks manifests itself in products and services generally being cheaper at a credit union vs at a bank. The image above (which uses data from the National Credit Union Administration) shows the average interest rate charged on various financial products offered by credit unions and banks in the United States. In every case, the rates charged by credit unions are either the same or lower than that rates charged by banks. This is a function of the fact that with credit unions, members are owners and the institution exists to serve their members and therefore profits are used to offer cheaper product and services to members. Another example of this difference is evident from account fees charged at a credit union vs bank:

As should be evident from the chart, it is substantially cheaper to maintain a checking account at a credit union than at a bank. In fact, although we’ve used averages in the above chart, it’s important to note that all of the top 5 credit unions offer free checking account options while none of the top 5 banks have similar fee-free checking accounts (the lowest they go is $4.95). The difference in cost extends beyond the typical account maintenance fee to other everyday fees such as overdraft fees and ATM fees. This is based on an analysis we performed looking at the top 5 banks and credit unions in the United States. The conclusion was that having a bank account at a top 5 credit union could result in a 50% savings compared with an account at a bank.  This is again, largely a function of the fact that credit union incentives are directly aligned with their members/customers. The final but equally important example that exemplifies the credit union vs bank incentive differential relates to interest earned on account balances: 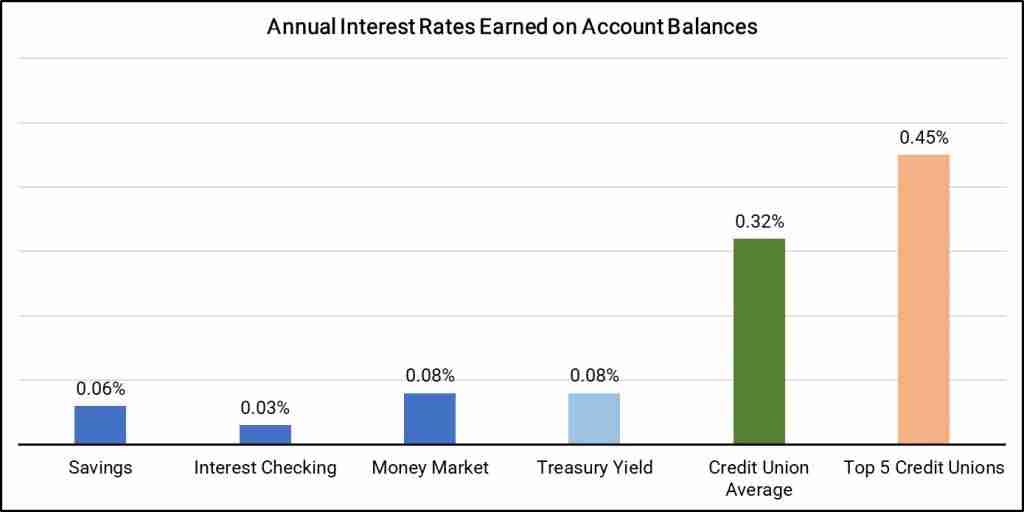 This data is based on average interest rates from the Federal Deposit Insurance Corporation (FDIC) through the first three months of 2022 and compared with the average dividend rate earned on deposits for credit unions over the same period. Credit Union customers not only get charged lower fees for accounts and interest rates on loans but also get paid much higher rates of interests on account balances. Importantly the above analysis utilizes averages; there are in fact many credit unions that have consistently paid out dividends to members that exceed the 2% threshold. Credit Union vs Bank incentives we’d argue is the most significant of all the differences between the two.

Another major difference between a credit union and bank is consumer accessibility. For the most part banks are willing (and able) to provide their products and services to pretty much anyone in the United States. This is especially the case for the large national banks such as Chase Bank, Bank of America and Wells Fargo which maintain a dominant share of deposits in several states across the country. However, with credit unions consumers first have to become members in order to access their services. Membership and in turn access to the various financial products and services, is limited to a select group of individuals. This is known as the credit union’s field of membership, and is an important area of difference in the credit union vs bank discussion. As a point of comparison, while many of the largest banks in the United States operate across the country and will allow almost anyone to open an account and get access to their services, the largest credit unions require you to be within the following fields of membership. For example:

That said, there are many exceptions to the rule. Not only do credit unions sometimes expand their field of membership, but many credit unions have effective workarounds and so there is a growing list of credit unions that anyone can join. This is in addition to the fact that most credit unions will allow you to join if you are a relative to someone that’s a member and often if you are relative to someone that is simply eligible to be a member. Bottom line, in terms of accessibility banks clearly are more open than credit unions, but there are enough credit unions and a large enough number of workarounds that anyone looking to join a credit union will have very many options to choose from. While we’re on the topic of accessibility, it’s important to note that banks are not only more accessible in terms of not a field of membership, but also in terms of their branch network. Our research indicates that while on average banks have 17 branches, credit unions on average only have 4 branches. Credit Unions on balance are less accessible than banks.

Another key finding from our March survey was that the adoption rate of technology at credit union vs bank customers was very similar:

As shown in the above graphic, 65% of bank customers pay their bills using either online banking or their bank’s mobile application which compares to 64% of credit union customers. This shouldn’t be too much of a surprise given how widespread internet access and mobile phones are in the United States and how mature online banking technology now is. Our survey also indicated that an institution’s technological capability was one of the top 4 things that both bank and credit union customers cared about when choosing a bank or credit union and by implication deciding on the credit union vs bank question. Looking at the top 5 banks and credit unions, on average their mobile applications have 4.8 and 4.7 star ratings from their customers respectively. So not only is there a similar level of digital adoption at both institutions but their customers appear to be similarly satisfied. All of that said, an important area of difference between credit union and bank technology is their adoption of Zelle. As we’ve discussed Zelle is quickly becoming the standard method of transferring money in the United States and for good reason: it is free and extremely fast. The simple fact that you don’t need a separate application to send and receive money with Zelle, can transfer funds at no cost and have funds available within minutes represents a significant advantage over payment alternatives such as Cash App, Venmo and Apple Pay. Some would argue this advantage is structural given the fact that, for example, charging for instant transfers is one of the primary ways that Venmo makes money. However, while there are now more than 1,000 banks that use Zelle, credit union adoption is significantly lagging as the number of credit unions that use Zelle currently sitting at less than 10% of all active credit unions.

There are in fact more similarities than differences between credit unions and banks. As a starting point there are currently thousands of each in the United States: today the list of banks includes 4,790 active federally insured banks and 4,903 active federally insured credit unions in the United States. Such numbers makes it functionally impractical to try to compare and contrast these institutions in an effort to find the best bank or the best credit union, and is a major driver of the complexity and confusion among consumers that created the impetus behind Bankdash. These are some of the other key similarities: 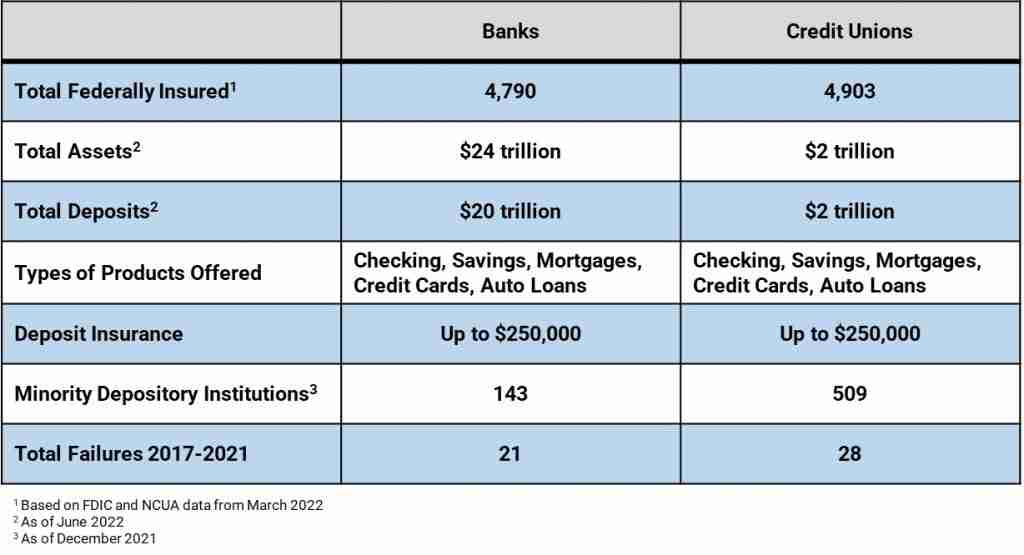 There are indeed more similarities than differences between credit unions and banks, and we’d recommend that consumers don’t view the credit union vs bank decision as a binary one. While only 6% of respondents in our survey indicated having accounts at both credit unions and banks, we think there’s a strong case to be made for maintaining accounts at both. For example, for products where there isn’t a significant difference in the rates charged such as mortgages you might even find that banks are more competitive (check out the rate summary in our post about mortgage rates) while for products such as auto loans, you can save a lot of money by opening the account with a credit union.

How Does Venmo Make Money? A Detailed Breakdown

Zelle: Everything You Need To Know About This Extremely Popular Payments Tool

Mortgage Rates: Everything You Need to Know

19 Great Credit Unions Anyone Can Join

Bank ATM Fees and How to Avoid Them

15 Most Important Banks in the U.S.